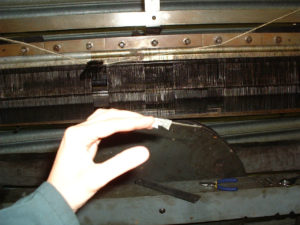 One of the things I had to learn to do was cast the lead that holds the needles.

Two needles are cast into one piece of lead.  The lead is shaped to fit the machine (each knitting frame has a mold for the needles). The lead has shapes that fit into the machine on both a horizontal ridge that goes across the machine and a vertical slot for each set of needles.  It’s somewhat precise, but since the lead is soft there is also a certain amount of adjustabilty. 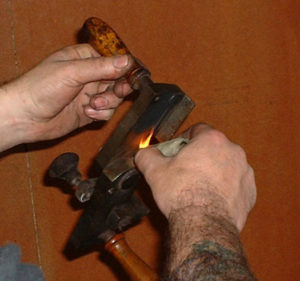 This is the first step, adding a bit of carbon to the mold with a candle flame.  This helps release the casting, similar to greasing a cake pan. 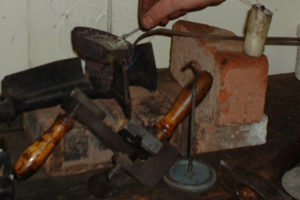 Here is the lead being melted in the ladle.  Since old lead is re-used, impurities need to be skimmed off the top. 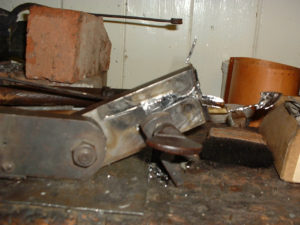 This is the cast needles still in the mold.  Pouring the lead tends to be fast, so I didnt get a good picture of that.  Notice the lead on the right side of the mold, that will be cut off and re-melted. 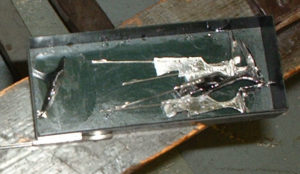 Here is a box of needles with the lead castings.  In the lower left corner is a top view, where you can see that there are two needles in the lead. 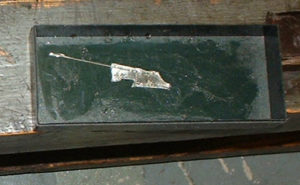 This is a lead that has been trimmed down to fit into the machine. 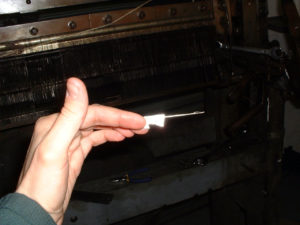 This is how to hold the needles to place them into the machine. They need to be fed into a narrow space.

As the frame was reconfigured into two sections instead of three, the needles could be inserted from the front.  To change broken needles, they need to be removed & inserted from the back. It’s taken me several tries each time to place the needles between the correct sinkers, but I’m getting there! 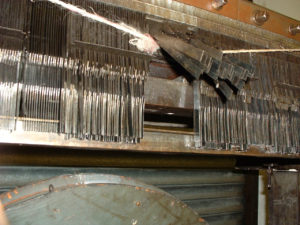 Here are the sinkers held out of the way so needles can be added from the front.  You can see the ridges that the needle leads fit onto. 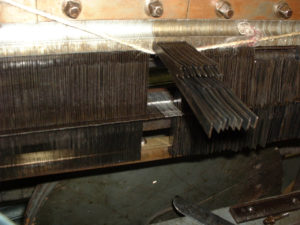 Finally the sinkers need to be arranged between the needles, one between each needle. 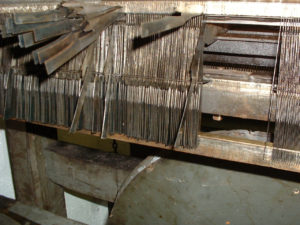 This shows how chaotic they were while other elements were changed and arranged.

Here are the sinkers nicely arranged on the right with a bit more work to go on the left.  Each sinker fits into a slot along the bottom, which is why I think of it as combing.

Though I am learning to knit on another frame, it seems that I have a pair of pliers in my hand much more often than I handle any yarn!