What is a stocking frame?

KNITTING TOGETHER: THE HERITAGE OF THE EAST MIDLANDS KNITTING INDUSTRY is a great site for detailed information.
The short version: in 1589, Reverend William Lee invented a mechanical device to knit. While most hand knitting was done in the round, the frame could only kit flat pieces at first. It’s about the size of an upright piano, but half the width. Frames got wider as developments were made. They were known as stocking frames, knitting frames, and stocking looms.
What they are not is a peg frame, an extended version of a spool knitter. The stocking frame is a more complicated machine.
Back to my adventure, January 8, 2001. 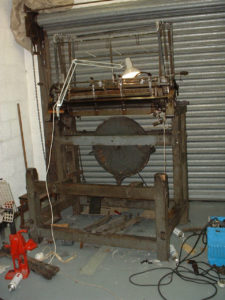 There are two photos of the frame, including the supports for the springs at the top. A lot of that has been taken off in order to move the sinkers. 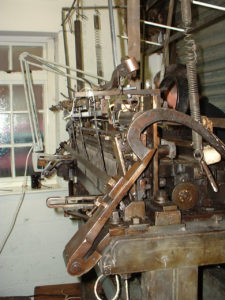 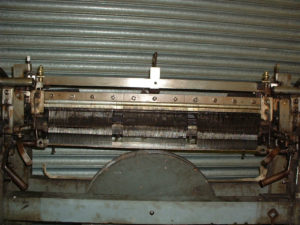 This photo shows the loosening of the second set of sinkers. They are accessible from the front of the machine. The sinkers are riveted onto lead pieces, and it’s the lead pieces that are being loosened. You can see a plate on the left side of the frame holding the lead pieces, and the rest of the plates have been removed. 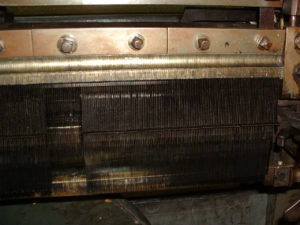 Here, I’ve begun moving the sinkers. You can see that the gap on the left is being filled in, while the middle is having the sinkers removed.  To the right is the gap that has not been filled yet. 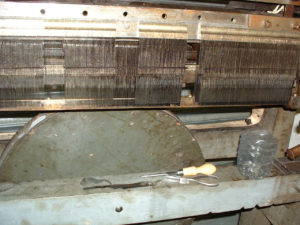 The sinkers have been moved. There are still jacks to be moved, which is why it looks like there are three gaps. Eventually the two at the sides will be filled in completely and there will be an empty space in the center. You can see at the top center that lead pieces are being filled in, leads without sinkers attached that are used as spacers. 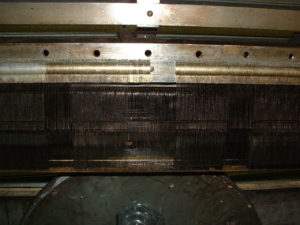 Finally the plates have been replaced which hold the lead pieces.The next task will be to move the jacks.