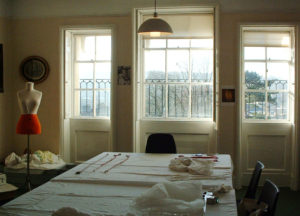 Or the middle. I’ve been fascinated with knitting frames (hand frames) for a long time, and in 2000 finally had a chance to see some working frames in person. I wasn’t aware of blogs existing back then, but I posted my experiences to an e-mail group at the time. Following is a post from January 8, 2001.

I arrived in Nottingham on January 2nd, and spent the 3rd getting settled and doing some shopping, which left me with two days last week at the factory with the knitting frames. Not only will I be learning to knit on a frame, I’m also learning how to maintain one. Ultimately I would like or be able to reproduce 18th century style stockings.

I’ve taken lots of pictures, but puzzling on how to present them in a logical order. I suppose describing things as they happen will be the only way I can do this.

The frame I’m working with was set up more for making lace scarves, the primary product of the factory. (The hand frames are not used there anymore; the knitting is done on modern machines.) Scarves are a looser knit than stockings, and also my frame was set up in three narrow sections. I explained that I needed two wider sections for stockings, so I would have the width necessary to get around the leg. That way I could also knit two stockings at once, all the better to keep them looking identical.

Back to the travelogue part of the report:  I spent the weekend in Bath. We went by way of Stonehenge. It really is quite impressive, and the barriers are not intrusive. But visitors may not walk between the stones. Bath is a beautiful city.  Sunday we visited the costume museum (of course!) and assembly rooms, the Roman baths, the Pump Room, and the Abbey. I even managed to drink an entire glass of the mineral water. It didn’t taste too bad, but it was very warm, which is how it comes up naturally.

Today, Monday, I had an appointment in the museum collections to view their stockings.  I looked at a pair of child’s stockings, salmon colored with white clocks.  The design was plated, which is a technique that fell out of use around 1750.

2 Replies to “In the Beginning”